No shipping costs for Europe

You are buying directly from the musicians. Thanks!

New sonatas for violin and continuo

Johann Georg Pisendel was one of those artists who undoubtedly marked the European music scene of the first half of the eighteenth century. He was a reference for performers and composers of his time and his legacy continues to surprise us and discover fundamental and unknown aspects of the Baroque musical world. Yet, Pisendel is still a great unknown.

He was a student of Torelli, Montanari, Heinichen or Vivaldi, with whom he also cultivated a deep friendship. Friends of his were also Bach, Telemann, Graupner, Zelenka, Hasse or Graupner. From among this wonderful list of friends we know that Bach wrote especially for him and that Vivaldi, Telemann or Albinoni dedicated sonatas and concerts to him. As teacher, Pisendel had among his students musicians like Quantz, Benda or Agricola. In addition, Pisendel was a talented composer, one of the greatest virtuosos of the eighteenth century and an avid collector and painstaking copyist who managed to gather in his archive for the orchestra of Dresden over two thousand scores, making his collection, known as Schrank II collection, one of the most important musical archives of the first half of the eighteenth century.

The recordings on this CD were made with a proprietary microphone technique, called ECA, that was developed by our sound engineer in order to achieve maximum sound fidelity, with very good positioning of the instruments in the virtual space that is being created between your speakers. The mixing and mastering process has been performed with an almost fully analog equipment chain in order to maintain the complex tonal character of the sound of gut strings and the harpsichord. This results in a musical vividness and three-dimensional sound that is rarely heard in acoustic music recordings.

Fine editions of the music contained in this CD. Find more about Johann Georg Pisendel here. 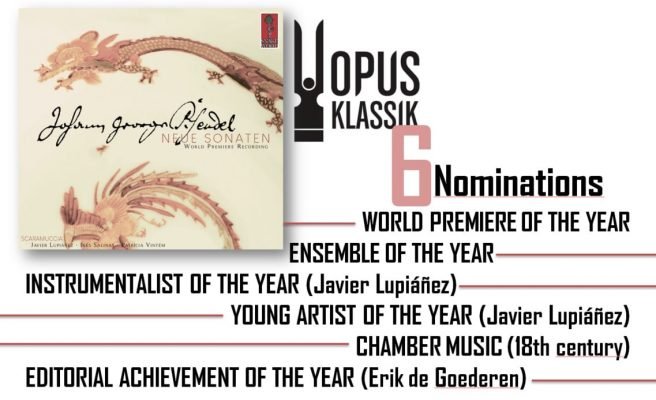 Under the leadership of director/violinist Javier Lupiáñez (performing on a 1682 instrument), the four-movement miniatures truly come alive – what a joyful sound these musicians produce! Lupiáñez’s skilful playing – his phrasing always carefully articulated and artfully nuanced – is complemented by the solid performances of cellist Inés Salinas and harpsichordist Patricia Vintém. (R. Haskell, The Whole Note, May/June 2021).

When baroque music is so convincingly and attractively presented it is hard to resist the charms and delights which begin with the booklet cover details of the delicate Chinese porcelain designs for a service made in the 1730s for the Dresden ruler. Images of dragon and phoenix together were traditionally used at marriages; here the marriage of Scaramuccia and Pisendel, a felicitous meeting worthy of attention and sincere accolades. (Early Music Review)

After a recording with likewise little-known works, the three musicians of Scaramuccia also show a lively performance of Pisendel, which, on the basis of sophisticated technique, enables the listener to understand the mature compositional technique and intensity of musical expression. The fact that the violinist sometimes has to act almost virtuosically, but can also create expressive slow passages, makes the many fine aspects of the score audible. In keeping with its name, the ensemble ventures into this little fray and wins it with a nimble bow and intense sound. (Pizzicato)

Pisendel – Sonata in G minor for violin and continuo (Edition and Study, PDF)